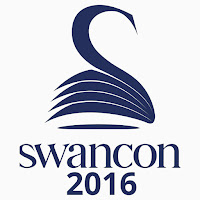 Where: Swan Con Panel at the Pan Pacific Hotel

I'm both host and a panelist in this celebration of short spec-fic down under. We'll have great book giveaways, including Aurealis Award winning and short-listed anthologies. I anticipate that like last year we'll have an audience led discussion. We'll most likely cover recommended reads, recommended writers, the market, the craft, the submission process, payment, publication houses and journals. The list goes on. Come along for an informative and fun night. Feel free to field questions too - we encourage it. 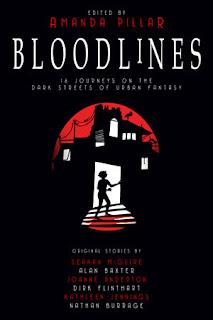 Bloodlines ed. Amanda Pillar (which I've a story in) won the best anthology category at the Aurealis Awards!


Congrats to Amanda Pillar along with the 16 writers, who all contributed to the award:
The complete Aurealis Award Winning List is below (congrats again to all the winners and finalists). Here in Perth we had a fantastic time at the Pan Pacific Hotel, where the great gang at Swancon had it streamed live from Brisbane on a big screen (with food and alcohol catered for). Wonderful night and it felt as if we were almost there.

THE CONVENORS’ AWARD FOR EXCELLENCE
Letters to Tiptree, Alexandra Pierce and Alisa Krasnostein (Twelfth Planet Press)
Posted by Anthony Panegyres at 5:58 AM 2 comments:

Awards and Reads and Releases


Congrats to All: Aurealis Awards and Ditmar Award Finalists

It's Ditmar and Aurealis Awards time in Australia. The shortlists are out and it's a thrill to say that the latest anthology I've a story in, Bloodlines ed. Amanda Pillar (Ticonderoga Publications), is a finalist for both awards.

There are plenty of great writers on the lists here and rather than congratulate everyone individually I've attached the links to the short listed works below.

Congrats to the editor of Bloodlines, Amanda Pillar, along with Ticonderoga Publications. I would also like to personally congratulate fellow Perth writer, Stephanie Gunn, whose novella from the same anthology has been short listed in the category of Best Fantasy Novella (Gunn is also a finalist for another novella in Hear me Roar ed Liz Grzyb).

It's not often you find Australian short fic being recommended so I feel humbled that Fossick Book Review has recommended one of my stories. 'Reading Coffee'  (originally published in Overland 204 in 2011) was the first story that I was truly proud of and it's recommended here alongside, Angela Slatter's (who is a giant of short spec-fic) 'Brisneyland by Night'. Once again the link is attached below.

Twenty One New Zealand Books We're Looking Forward to in 2016

The next anthology I've a story in, At the Edge ed. Dan Rabarts & Lee Murray is on this list of New Zealand books to look forward to reading. It's released in June.

On Saturday I attended Lee Battersby's launch of his new novel for children Magrit. Battersby usually specialises in dark spec-fic (often with a comical edge) so hearing Battersby read so well to a much younger audience than usual was an enjoyable surprise. The story had all the wit and evocative imagery that readers expect from Battersby's adult work too. Lee ran a fun launch and Stefen Brazulaitis of Stefen's Books (check the store out in Shafto Lane if you get the chance) organised a great pub lunch post-launch too. 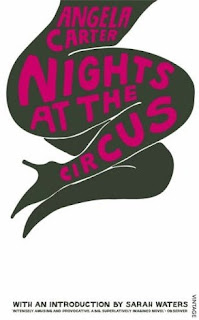 Just finished Nights at the Circus by the incredible Angela Carter. It's a genre defying tour de force, well worth savouring and it deserves all the kudos it has received.  The perpetual dichotomy of the winged heroine, Fevers makes for one of the great characters in literature. It's already one of my all time favourite novels.

Political Gripe: Okay, we can't really say too much Down Under after the rise of Tony Abbott but at least he's now fallen. Yet the Americans have trumped (or drumpfed if you've seen John Oliver's comical segment) us in the Mad Tea Party stakes. What's dangerous about the far right is that it plays on fear and division rather than inclusiveness. Wake up, America! This guy, Drumpf, is leading you down a foolishly dangerous and bigoted path.

Posted by Anthony Panegyres at 1:03 AM No comments: