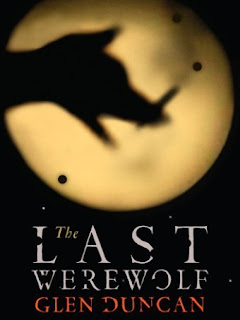 Clever and droll, Jake Marlowe is the last werewolf in existence. Basically, he’s a 'killfuckeat' kind of guy, who is also one hell of a writer. Jake is both man and beast: a man who has saved lives against humanity's many monsters (Nazis etc), yet he also literally feasts on people himself. He has a bestial need to satisfy his libido too.

As the narrator, he immediately lures the reader in with a loveable intimacy - despite one particularly grotesque scene from his past. After 200 years, Jake's almost contentedly awaiting World Organisation for the Control of Occult Phenomena (WOCOP) to finish him off. Gainer, whose father was eaten by Jake, is WOCOP's finest and he's waiting for the full moon to take Jake as the beast. But then Jake falls in love as if in a romance novel: truly, madly and deeply. It's his character's metamorphiosis, now he has a responsibility to live, which is great for Gainer, who has been seeking a challenging final hurrah.

can write and his wit is ceaseless. His language doesn't strive for suitability alone but also freshness like fellow English authors, Martin Amis and Will Self (although not to Self's extreme manner). The line in Jake's journal about Graham Greene's work cuts to the core regarding Duncan's own text: "Graham Greene had a semi-parodic relationship with the genres his novels exploited." The Last Werewolf refers to a range of texts, even Buffy and Angel in a fun read. He purposefully exploits, like Greene, the usual genre motifs - here it is the werewolf and vampire (of course Greene didn't touch those) - and like Greene again,  does much more than any cliched genre novel.

If I had to be hypercritical, I'd say the ending did seem a little too pulpy and pacy; and I'm not sure if the late change in narrative voice was entirely successful. Furthermore, I hope that doesn't cheapen a great work by selling out with a series of sequels - there is scope in The Last Werewolf to do just that.

But overall it's a highly successful blend of pace and literary merit, an enjoyable novel which rollicks and rambles along.

I'm eager now to go on a Glen Duncan binge and sink my canines into more of his earlier, and apparently more 'literary' work.
Posted by Anthony Panegyres at 12:40 AM