'Istanbul: The Imperial City' by John Freely & 'On Writing' by Stephen King

Istanbul: The Imperial City by John Freely & On Writing by Stephen King

Over the past decade I have been an avid reader of Ottoman history, especially that of Constantinople/ Istanbul. While Constantinople: 1453 to Present by Philip Mansel is (to me) the epitomy on the subject, The Imperial City by John Freely is still an informative and interesting read with well chosen primary source exerpts that really add texture and colour to the work. It is a history of the city in its entirety, from the earlier Greek settlements to the Byzantine Emperors/Empresses, through to all the Sultans and eventually ending with Attaturk, the Father of the Modern Turkish Nation. As it covers a broader scope than Mansel's text it consequently does not have the richness of Constantinople: 1453 to Present but it is still an excellent overview of 'The City' and also an easy read. Anyone interested in Byzantine or Ottoman history would be missing out without reading The Imperial City. 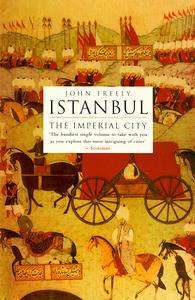 Of recent times, I have found texts on the writing craft and process riveting . On Writing by Stephen King surpassed my expectations. It is an honest and humble memoir/writing text that I was thoroughly absorbed by. King's humility here is extraordinary; and his reading list at the end of the text shows just how literary minded he actually is. The snippets of prose he delivers are a welcome illustration of his refined skills as an author.

King's personal writing history and his recovery from a chilling accident captivate; his writing tips (avoid the passive voice, murder your darlings and avoid adverbs) are useful as are his ideas on creating characters with depth that avoid being charicatures or stereotypes. It is fascinating that King, in order to maintain a freshness of story, usually advocates for little planning - his work largely comes from 'what if scenarios'. I am not a horror fan per se (although it is growing on me) but it is hard to deny King's success or extraordinary talents as an author. On Writing's openess and frankness makes you feel as if you are there with him, sitting in the room and having a chat over a cool drink or cup of coffee; as such, it is a highly recommended read for all writers, and also for those interested in the life of one of the bestselling authors of all time.﻿