Overland Literary Journal is having its annual Subscriberthon. 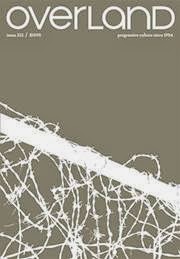 For me, it’s not about the gifts and packages Overland is offering (although Christmas is around the corner), I’m a subscriber as I believe in what they offer to the community: a willingness to engage in socialist discourse – and serve up a  polemical when required too.

The fact of the matter is that you can read the journal for free online. So, in effect, subscribing is similar to donating to the journal. A journal, mind you, that has been steadfastly at the forefront of socio-cultural and political discussion since it began in 1954.

Overland encourages an open-minded liberal debate. And, what’s more, as a subscriber you’ll be supporting writers who earn the professional standards of pay that Overland provide, which is a rarity in the world of modern literary journals.

As a short story writer, I’m a keen reader of Overland's prose (another reason to subscribe as fiction resonates far better for me in print). Under the previous fiction-editor, Jane Gleeson-White, and the current fiction-editor, Jennifer Mills, the selection of stories has been impressive, a mixture of new and established writers who merit praise. Let’s not forget that Overland unearth new names (and hopefully future stars of Australian literature) as well as publish established authors, including Peter Carey, Patrick White, Thea Astley, Christos Tsiolkas, Sophie Cunningham, Charlotte Wood, Margo Lanagan and many, many more.

Despite their free option, or as a result of it, under the guidance of the mercurial Jeff Sparrow, Overland is growing in terms of both readership and subscribers (both at a 30 year high). They are also closing in on 5500 followers on Facebook. Overland's recent growth is integral to the left having an impact. Its many voices are being heard.

If you’re interested in the arts, literature, politics, as well as cultural and social issues, then Overland could well be the journal for you.

I’ve attached the contents page of the latest edition. Take a look for yourself: