A Matter of Context 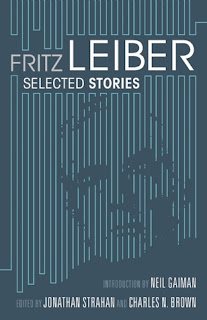 The thoughtful foreword by Neil Gaiman along with back cover praise from Michael Chabon and Harlan Ellison reflect the vast influence that Fritz Leiber had, and continues to have, on contemporary writers. Selected Stories is a wonderful homage to an author profoundly respected by readers as his numerous Hugo and Nebula Awards indicate, along with his World Fantasy Award for Life Achievement. Leiber's legacy among all three subgenres of the speculative field (horror, fantasy and sci-fi) is clearly evident in this collection.

I don’t think there is any doubt that Michael Swanwick’s charismatic pair of rogues, Darger and Surplus, are also indebted to Leiber’s Fafhrd and the Grey Mouser. Leiber today is undeniably better remembered for this ‘literary’ sword and sorcery stories starring the duo, the tall, broad-shouldered Northerner, Fafhrd, and his smaller but equally deadly friend, The Grey Mouser. I had read Swords and Deviltry in my early teens and therefore knew ‘Ill Met in Lankhmar’ and it was also of no surprise that I’d already read a few of Leiber’s other tales in Selected Stories, including ‘Gonna Roll the Bones’ and ‘Four Ghosts in Hamlet’. It was an amusing surprise though to discover a couple of stories that I’d also studied back in high school: ‘The Inner Circles’ and ‘A Pail of Air’.

It may be a false assumption but I think editors, Jonathan Strahan and Charles N. Brown, aimed to create a collection that reveals the broad work of Leiber rather than just a Best of. Neil Gaiman unequivocally touches on it in his reflective intro: some of these stories are dated…And some are to an egregious extent. It’s not only the stories themselves but also the verbose, showy prose, which at times is splendid, but at other times seems to lose control of rhythm and flow.

But for any aficionado of the history of the spec-fic short story this will not diminish the collection. I suppose it’s all a matter of context. Leiber, after all, was a product of his times, and when speculative fiction writers willingly explore the values and attitudes and ideologies of their era they are always at risk of dating quickly. In terms of contextual understanding of the era, Leiber fascinates. If you read these stories with an appreciation that Leiber lived in a period in which the political ideologies of fascism, as well as communism and capitalism, were at the forefront you begin to understand his intentions. The old East vs West Cold War arguments have changed though, which may mean a degree of inaccessibility for contemporary readers.

Although all the works may be dated a little in terms of prose, the stories that tend to date the most involve themes that explore political and nationalistic ideologies. Leiber was passionate about speculative fiction having a dual role, whereby it not only told an interesting narrative but also explored societal issues of its day. As such, stories such as ‘America the Beautiful’ may bore a reader with the supposedly ‘alien’ disconnect between Russians and Americans; and ‘Belzen Express’ and ‘Catch that Zeppelin’ (which I didn’t finish) explore fascism. I found it challenging to connect with these stories.

‘The outspread newspaper started to slip from his knee. He detained it, let his glance rove over the next page, noted a headline about an uprising in Prague like that in Hungary in 1956 and murmured, “Damn Slavs,” noted another about border fighting around Israel and muttered, “Damn Jews,” and let the paper go.”

Other works that date tend to be the ones involving dreams. Again this reflects Leiber’s period in which the popular psychoanalytical ideas of Jung were influential. ‘Horrible Imaginings’, critically acclaimed at the time, strongly reflects Jungian notions of individuism but try as I might to finish the story, it defeated me.

“Each “Peformance” of this frightening lightless dream, on those nights when his unconsciousness decided to put on a show, would begin the same way.”

As previously touched upon, it’s easy to appreciate why these stories, both dated or otherwise, are still included in this selection. It would have been easy for Strahan and Brown to travel down the populist ‘Fafhrd and the Grey Mouser’ path (there are only three stories here from that ‘literary’ Sword and Sorcery genre). It is a credit to both editors that they presented work more truly reflective of Leiber’s varied repertoire.

Standouts include ‘Smoke Ghost’, a wonderful atmospheric tale of psychological horror; ‘A Pail of Air’ which is one of those great dystopian tales of a sunless Earth; the classic Fafhrd and the Grey Mouser story ‘Ill Met in Lankhmar’ along with the entertaining supernatural gambling classic ‘Gonna Roll the Bones’.

But the overall highlight is ‘Bazaar of the Bizarre', a Fafhrd and the Grey Mouser story. Like most of Leiber’s stories ‘Bazaar of the Bizarre’ works well on a metaphorical level. But this time the story relates strongly to an ideology relevant, if not omnipresent, in our own present day society: that of consumerism. Sure, the metaphor is overt - The Grey Mouser finds himself enchanted by garbage in a shop, all sold by a grotty alien race who produce garbage with the illusion of being something more - but the story is also a fun swashbuckling one. It won me over both in terms of adventure and mystery but also for its satirical attack on consumerism. And who today can’t relate to that?

So ultimately although a number of Leiber’s stories may be more of an ephemeral nature and captivate more in terms of historical context and historical interest, there are still several here that hold their own weight. And, more importantly, Selected Stories is a celebration of not only Leiber’s enduring influence but also his incredible legacy.
Posted by Anthony Panegyres at 7:35 AM