Marquez’ early hook entailing a murder of passion over a posted lampoon made me eagerly rip through the initial part of his debut novel. My excitement waned soon after as his attempts in painting a forlorn, cursed and decaying town became a jumbled mess. The heat and humidity are omnipresent, as is the theme of corruption; yet it appears that Marquez did not have the skill to realise his vision here. There are flashes of brilliance but they are lost in the depressing mire that surrounds them.

The Nobel Laureate still offers the occasional sensual turn of phrase that delights so many of his fans: for instance the cow carcass in the river and the accompanying stench was a worthwhile motif. But for the most part you have to search heavily among the cheap 'throw away' zirchonias for anything of value.

I think that Marquez’ fallibility as a novice is interesting in itself. Despite its many failings, the novel gave me a gratifying sense of hope – after all, if Marquez came so far from this point, perhaps it means that we can all improve on our narrative craft to some degree.

Structurally, the book leaps all over the place without any of Marquez’ later mastery of narrative voice. Rather, his voice appears almost identical throughout despite Marquez’ endeavours to portray his usual array of vastly different characters.

With regards to atmosphere, Marquez' attempt at creating a town under an 'ever-present cloud of evil' does not work – it reads more like a gentle mist. Furthermore, his foreshadowing of events and even the events themselves have a clichéd, almost cartoonish quality that isn’t quite folk tale or fable or something in between.

Although in parts, Marquez’ future ability is glimpsed, on the whole, In Evil Hour is less than a shadow of his great works. My advice would be to avoid In Evil Hour and explore his more rewarding writing. The bait and hook, which initially seems so promising, ends up delivering  blowie* after blowie. 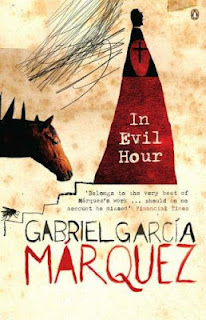 Posted by Anthony Panegyres at 9:06 PM