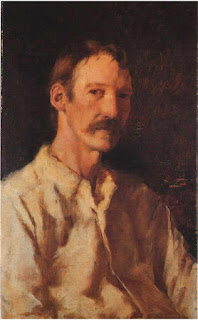 Robert Louis Stevenson suffered ill health throughout most of his short life.

Not that alone: but the more deeply Mr Henry floundered in his brother’s toils, the more clownish he grew; and the more the Master enjoyed his spiteful entertainment, the more engagingly, the more smilingly, he went!

Henry Durie is dour, honest and straight,  he also lives deep within the shadows of his charming older brother, Master James Durie. When James leaves for adventure by joining the Scottish rebellion, Henry inherits the ancestral mansion and lands along with the title of Lord Durrisdeer, as well as Miss Alison (who was initially smitten with James).

After a life of piracy and mutiny and some savage deeds, Master James returns, seeking to usurp Lord Henry. What entails is the story of the devilish adventurer in battle with the domestic gentleman.

The novel is a heterogeneous mix of Stevenson. The brothers are polar opposites as in the hybrid Dr Jekyll and Mr Hyde, and when James is on the high seas a reader may be reminded more of Treasure Island. Stevenson includes a dash of everything: history, tragedy and romance; buried treasure and pirates, the mystical and the unknown. Perhaps it spreads itself too thinly, not everything comes to fruition apart from observing the brothers’ descent:  the masterful fake, James, dueling with the steadfast, Henry. Both are obsessed with one another and Henry ultimately changes in the process.

Makellar, the chief narrator and largely Lord Henry’s man, is truthful with his emotions yet incapable of action during critical moments of the story. Although not an unreliable narrator, it feels as if he is almost one, and this fuels and compels the underlying tension within the text. He both loathes and admires the Master for his performance and ability to cast a ‘glamour’ over others around him.

The Master of Ballantrae explores contrasting notions and ideas: the duty-bound family man versus the manipulative adventurer in perpetual motion; the old world versus the new world; the natural man versus the mystic. Despite the ever-present conflict, the novel is subtler than most of Stevenson’s works and tends not to have a tight narrative thread but meanders about, sometimes deliciously and sometimes unsure of itself.

While The Master of Ballantrae is not the superb and much tighter The Strange Case of Dr Jekyll and Mr Hyde, it is an absorbing read in its own unique way. It successfully displays Stevenson’s mastery in terms of political and psychological intrigue, as well as his literary genius.
Posted by Anthony Panegyres at 2:50 PM