Recent Reads: 'Specimen Days' by Michael Cunningham and 'Claw of the Conciliator'

Recent Reads: Claw of the Conciliator by Gene Wolfe and Specimen Days by Michael Cunningham

On Claw of the Conciliator' by Gene Wolfe

There was just enough intrigue in Gene Wolfe's The Shadow of the Torturer to entice me to return to its sequel, Claw of the Conciliator. Although Wolfe is deserved of his many plaudits I do not believe t he is the 'James Joyce' of speculative fiction as many critics claim; although from what I have read of his short fiction he may be more deserving of the title in that particular genre. Reading Claw of the Conciliator was déjà vu. Once more, I found myself liking but not mesmerised by Wolfe. He is simultaneously both brilliant and frustrating. The antiquated future successfully melds the genres of fantasy and sci-fi; Severian's sexual exploits and prowess, however, border on being of a debased nature (although they always hint at something deeper).

Wolfe at times seems to be taken by flights of fancy in terms of plot and his obsession with depth of meaning means coherency is often lost. His need for this many-layered depth can weigh the reader down and this is Wolfe's greatest flaw in the long form.

After hearing Gary K. Wolfe (whose views I admire and respect) on the Coode St Podcast comment on Wolfe's subtleties and layers, I initially thought that had hit the bullseye. But after further contemplating Gene Wolfe's novel I have altered my opinion. Layers: yes. Subtleties: no. There are layers upon layers in Claw of the Conciliator but the metaphors, although occasionally indecipherable, do not feel subtle at all.

For instance, the green man from the future jars. This loud metaphor works though in this case as he  represents a future whereby mankind photosynthesises like plants. And thanks to an article in Cosmos about a sea slug shown to me by a mate, Phil English (a Cosmos contributing writer), in which a unique slug eats one sole meal of algae in its infancy then actually photosynthesises from then on, Wolfe’s vision may one day be realised. And the colour of the slug - surprise, surprise - is green too.

What I basically feel about Wolfe is that he has purposefully crafted a novel with layered meaning in a world that blends medieval, the classics and a decaying future. But he is not subtle. His metaphors, although they often require cryptic solutions (which is stimulating for an astute reader) are anything but subtle. They, like the river monster, surge up at you signalling or rather screaming at you to look for something deeper and perhaps this is where Wolfe, despite his brilliance, disappoints.

On Specimen Days by Michael Cunningham 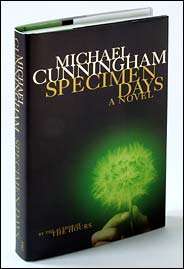 Michael Cunningham's Specimen Days is composed of three neat novellas, which all contain a twist at the end.  In all three there is Lucas (Lucas, Luke and Luke), a small boy, with a weak body and oversized orange-shaped head; and Simon (whose character varies from a deceased brother; to a wealthy collector and seller of antiques; to an android searching for his soul); and Catherine (a street-smart impoverished girl; to Cat, a lit-loving African American detective; to Catareen, a Nadian - a species of alien that forms the persecuted class on Earth).

The three novellas are interlinked via Walter Whitman's poetry, which actually services the stories without jarring as much as I had anticipated, and a unique bowl (I will leave the later for the lit critics to analyse). The linked stories move from past, to the contemporary city, before culminating in the of the future (although this final piece is largely based outside of the Big Apple).

Cunningham's prose is lyrical and effective for the most part. Although there were a couple of questionable bits of writing that stood out where Cunningham strives to be too clever and falls short. No guessing as to which adverb stands out below:

"Perhaps he had gotten up during the night and moved them, somnambulistically. No. They were nowhere."

And although Cunningham is an astute user of repetition - he uses it to considerable effect throughout Specimen Days - the following felt like a poor man's version of Cormac McArthy's The Road:

"The horse whinnied insistently. It needed to be fed. He went and fed the horse."

Overall however, Cunningham illustrates with these novellas that he is not a one-trick pony in that he successfully delivers three stories with vastly different voices. And to Cunningham's credit, all three have their own beautiful and steady rhythm. All three, like most ambitious works, also have their flaws. The ghostly-gothic In the Machine seems to climax and resolve too quickly after a slow-simmering build up of tension. The Children's Crusade falls into noir clichés and its attempt to change the African-American stereotype is too deliberate and calculated that it may further polarise readers (Cat, an African-American bomb-squad detective, is a literature major who everyone thinks is white on the phone). And Like Beauty relies on the canons of yesteryear science fiction, with chases, exotic alien prowess and alas, info-dumps.

Yet Specimen Days is certainly worth a look at for both writers and readers. Cunningham wins the reader over with his prose in general but he also embraces our most endearing quality, that of compassion. And in this sense, Cunningham has something meaningful to say. The recurring theme is illustrated in all three pieces via sacrifice of some sort.

All three stories contain their hero, and Cunningham here is a hero too in courageously exploring three genres (historical ghost story, detective thriller and sci-fi) to deliver a fine 'novel' or three 'loosely linked-novellas'. Regardless of what the form is labelled, I am glad that I read it and I am now eager to read another of his other novels, Flesh and Blood.

PS And a big 'thank you' to Deborah Hunn for recommending Specimen Days some time ago.

Posted by Anthony Panegyres at 4:35 AM