I saw some great acts at the Perth Writers' Festival over the weekend and it's fast becoming one of my favourite events on the yearly calendar. I bought the following books: The Australian Movement by George Megalogenis (I read all his work - the beauty is that he adds cultural elements to his political/economic analysis), Making Trouble by Robert Manne, Prime Cut by Alan Carter and The Waterboys by Peter Docker. 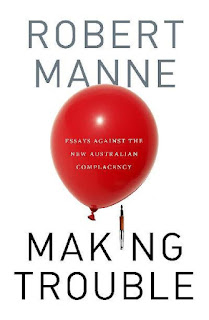 I don't intend to turn this blog into a political one. But I'll make an exception here - after all, it relates to a more politically natured panel at the festival.

I ventured an audience question to Peter Cleary and Robert Manne, and although I'm not usually prone to nerves, my voice trembled. I said to them that often in Australia there is a lack of economic reform in times of prosperity which affects us a decade later. Basically implying that Menzies' lack of reform did not aid Whitlam; Hawke and Keating aided Howard; and the Howard of later years and the recent Labor government have not done a lot either. So despite our relatively blissful times on a current global scale, we are not ensuring that the next decade will be as equally stable. Rudd certainly tried but the mining magnates bullied and bamboozled him, as did Gillard and Swan (I still can't fathom why he didn't wait for a new term before taking on a behemoth like the mining industry). I told Cleary that I agreed with his praising of the Norwegian model (in which the tax on petroleum mining is very high ,and the federal government also has a sizable stake all the mining companies too). And, after what must have appeared a diatribe in the making, I finally asked Cleary: How do you battle the corporate campaigners? We saw what happened to Rudd. How do you change the nation's psyche regarding the issue?

Manne answered on Cleary's behalf and I felt a childish buzz when he said it is a question that we all should be asking. Later on outside, Robert saw me and came over to reiterate that it was an excellent question (chuffed like a kid once again) and Cleary agreed and eagerly provided his own answer. (I won't quote either of them on the issue in case they are taken out of context).

The fact of the matter is that there are other solutions and we could (and should) be doing more in terms of economic reform, especially with regards to mining. It was both a pleasure and humbling experience to be able to later 'chew the fat' with two writers whose opinions and works I admire. 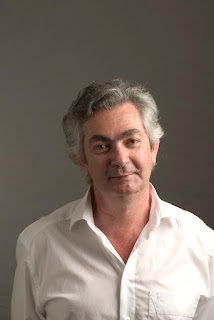 Posted by Anthony Panegyres at 5:14 AM