Despite my self-imposed ban, I bought again: evidence that I would have failed as a Spartan.

Readers may think I'm suffering from a multiple personality disorder when looking at the variety here.

After enjoying The Last Werewolf, I bought three Glen Duncan novels: I Lucifer from New Edition 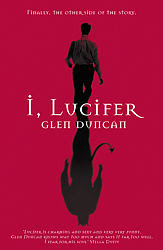 The embarrassing cover below couldn't prevent me from buying Swords and Dark Magic (an anthology edited by Jonathan Strahan and Lou Anders) from a bookstore in Shafto Lane soon to be called 'Stephen's Books'. I loved Strahan's The Locus Awards and this collection seems like it's fun as well as having a celebrity list of authors: Gene Wolfe, C.J Cherryh, Michael Moorcock, Robert Silverberg and Joe Abercombie to name but a few. More importantly, they are all juicy 'long' short stories rather than flash fiction.

And my final buy was recommended by Jasmine in New Edition: Four Novels by Marguerite Duras. Which are really four novellas: The Square; Moderato Cantabile; 10:30 on a Summer Night; and The Afternoon of Mr. Andesmas.

﻿On the reading front, I have just finished The Shadow of the Torturer by Gene Wolfe and I am currently reading The Quantity Theory of Insanity by Will Self; an author I find refreshing. Self is satirical, cynical, witty and loves showing it. He is a stimulating change from both understated prose and also the more poetic narratives. I am glad that there's a writer like Self around. He occasionally misses the mark and some of his psycho-babble stories infuriate me but when on-song, his ostentatious vocabulary combined with his misfit worlds, captivate in a way that not many other writers are capable of.

As always, I'm interested in your thoughts on any of the above books or authors.

Posted by Anthony Panegyres at 6:25 PM No comments:

Short Story: 'The Bordello In Faerie' by Michael Swanwick

"The Bordello in Faerie" by Michael Swanwick

A young man, Ned, who starts out as a bit of a buffoon, becomes aware that on the other side of the bridge which separates the world of the mundane from that of the Faerie, there is a renowned brothel. He crosses over and keeps returning to the bordello as the readers' world  - and Ned's - is flipped midway through the story. I won't reveal any secrets here but it was the twist in the middle, as opposed to the dated twist at the end of many short stories, that had me completely.

The story does have its flaws: the afterwards may seem a bit too 'nice' to some readers and his brothel endeavours begin to drag.

In my view, the brilliance of the idea overides the tale's minor blemishes.
Posted by Anthony Panegyres at 11:48 PM No comments:

Outside of the short form, this is the most genre fiction I've read in years! 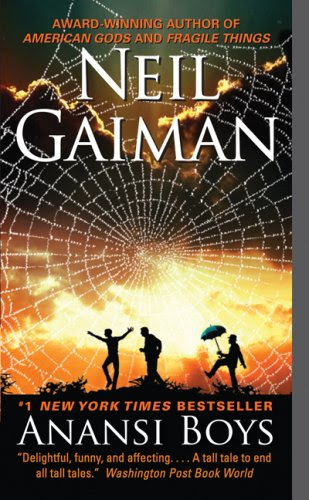 So much literature ends in tragedy and I was in need of something lighter so possibly the timing of the read affected my take on Neil Gaiman’s Anansi Boys. It is now my favourite Gaiman novel (with Neverwhere) and I was told by a well-read friend at Planet Books that Anansi Boys was his worst: definitive proof that reading is in the eye of the beholder.

Fat Charlie is your regular Joe: slightly unhappy and plodding through life as an honest accountant for a weasel-like boss. He lives in England and is engaged to Rosie, in a comfortable but sparkless relationship.

Charlie’s youth, with his then together family, was a brief but colourful time in New Orleans. His father was a prankster with who he hasn’t endeavoured to communicate with since he and his mother left for England many years ago.

After being pressured by his do-gooder fiancé to rebuild his family ties before their wedding, Charlie finds out that his father is dead. It further unravels that his dad was a trickster storyteller God of some note and to make things more interesting, Fat Charlie discovers that he has a brother who seems to have taken after his father. That brother, Spider, arrives on his doorstep and Charlie's life begins to take on colour: both horrific, exciting and comical.

Neil Gaiman tells a great story here. The various threads are delightfully woven in a well-structured novel. It kept me smiling throughout with its larger than life characters. Gaiman’s language matches their playfulness in a gripping story.

Anansi Boys is on the lighter side, without being too silly or overly farcical. It’s simply  fun, something akin to an extended bedtime tale. It was more entertaining than the much lauded American Gods (which I still liked). If you’re after a witty chromatic read, then Anansi Boys is for you.

I found it a joy. It will have you singing too!
Posted by Anthony Panegyres at 9:09 PM 4 comments:

Why do we bother with bookstores when we can buy online...


Outside of brightening a dull street, bookstores open a physical window for the reading community, not only do they offer respite from a busy world but they also offer readers a conversation with 'bookish folk' as well as tactile browsing.

Independent stores, not only bookstores, are vital in adding colour to our society; they're a break from the chain stream norm, which a consumerist society is often sold on. Who doesn't want variety and culture?  In Perth, I tend to order from both Planet Books, New Edition, Stefen's Books - all fantastic independent bookstores; I also occasionally buy from Oxford Books, White Dwarf Books and Crow Books. I do this to support them – I don’t want them vanishing and they offer a far better selection than the chain stores. 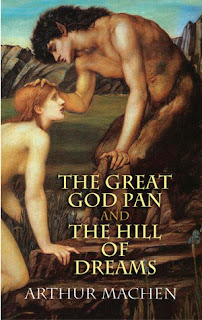 I'd been tracking down the out-of-print The Great God Pan, but once reissued I ordered it from New Edition in Northbridge. The reasons for the buy vary: HP Lovecraft thought it a masterpiece; Jorge Luis Borges said it is a must read and the first true horror novel, which also greatly influenced his own work; and Stephen King (by the way, I’ve only read The Green Mile) stated:

“The Great God Pan” is one of the best horror stories ever written. Maybe the best in the English language.”

The whole notion of a Victorian horror set in England and Wales, acclaimed by Borges, with bizarre links to the Pan’s essence, had reeled me in.

Mary, a young girl in Wales is experimented on by Dr Raymond in an attempt to have  human contact with the deity Pan. The essence of a truly horrific Pan takes over. The girl grows up leaving a trail of deaths behind her. Mary, who is considered both repulsive and attractive, goes to London, where the characters rediscover her as Helen Vaughan. Helen, in turn, leaves another Hellish trail of fear and peril wherever she ventures.

The story grips the reader in terms of the characters tracking Helen’s actions and the unraveling of the unknown. The novella however, seems overly brief and does not achieve the dizzying highs I expected after reading the reviews. It has neither the depth nor the brilliance of The Strange Case of Dr Jekyll and Mr Hyde by Robert Louis Stevenson (published earlier in 1886).

Although The Great God Pan, as per the era, is written in a somewhat antiquated style, it successfully fascinates in an historical sense with its capturing of a period in which many were obsessed by the Greco-Roman world. Tension is built throughout, but I would have preferred to have been placed into the story more so rather than following characters discussing events. The climax is more of an anti-climax, but I certainly did not regret the quick read and for those interested in Victorian gothic, it is appealing in terms of both the boundaries it broke and its context.

At the time, the critics gave The Great God Pan a pounding for being too licentious. Machen even states in the revised edition’s foreword that it was very popular among England’s female readership who liked the 'salacious' text - thumbs up to Victorian women! Later critics, as earlier mentioned, lavishly praised The Great God Pan, making it the cult text it is today.

Overall, The Great God Pan did not terrify me as it did with Stephen King and many other readers. While it isn't a 'must-read' it is a worthwhile text; it's also one of those stories that remains with you long afterwards.

Posted by Anthony Panegyres at 8:44 PM No comments:

Not a review but a liaison: 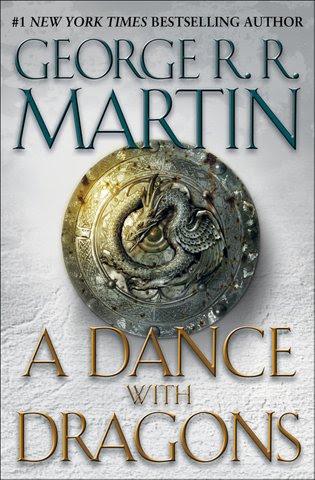 What can I say? Even after a myriad of pages, I still craved more.
I’m insatiable when it comes to these novels. I know that it is not seen by many critics as a good confession in a literary sense, but I'll happily proclaim that I’m enamoured with the Song of Ice and Fire. Martin is a storyteller who enraptures readers.
Yes, the world is too big and overloaded with characters. But then again, the characters are captivating and the world is superbly drawn. Yes, Martin is fixated with words like ‘mummer’ but fans, like lovers, forgive, so we can overlook all those ‘mummers-this’ and ‘mummers-that’. And I am a fan, a massive one.

In terms of writing, most chapters end on cliffhangers, fastening you in place until those involved reappear down the track. Not a bad ploy when dealing with a novel of this length.

Like in the musical Oliver! all I have to ask of Martin is this: ‘Please George, I want some more!’
Posted by Anthony Panegyres at 9:36 PM 2 comments: