UFC article in The Guardian, some background info. and additional comments

My opinion piece in The Guardian on Mr McGowan's promise to legalise cage fighting if elected was always going to cause a stir. Any writer taking on an industrial behemoth like the UFC expects this. I actually admire the athletes and what they are capable of, but this is about more than that - it's about people's long term health, the human cost and the cost to the community.

I'd like to personally thank Robert Reid from the Australian Medical Association (WA) for his ongoing support, communication and information; the editor of The Guardian, Lucy Clark for her work on the piece, and my wife for the medical papers on concussion and brain disease (not linked to the article).

This was a relatively long piece for The Guardian. I'd like to thank them for publishing it - it's a brave move as the UFC and MMA lobbies have passionate fans.

With this genre there are cuts due to word limits (the subtitle was The Guardian's too). I respect their decisions as they know the medium and the nature of the internet far better than I do. I've supplied some dot points below.

I appreciate that this topic may polarise people. Conversation and debate and dialogue are always welcome. I'm happy for all your comments to be put up over at The Guardian but I won't be open for comment here as I rarely view my blog and won't have the time to reply. All the aforementioned points are just to provide further context for those interested.

Posted by Anthony Panegyres at 2:23 AM No comments:

Interview with Angela Slatter about my latest story 'Crossing' in At the Edge, Reviews of At the Edge and Thanks

Interview with Angela Slatter about my latest story 'Crossing' in At the Edge ; reviews of At the Edge by Alisha Tyson of The New Zealand Listener and Angela Oliver of NZ booksellers ; interview from the Editors, Dan Rabarts & Lee Murray & Thanks &  Current Reads. 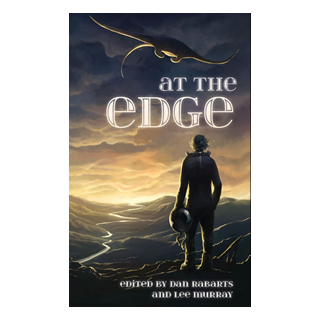 I've read four stories so far by World Fantasy and multiple Aurealis Award winning author, Angela Slatter. All four are very good and three of them: 'The Coffin-Maker's Daughter', 'The Hall of Lost Footsteps' (co-written with Sara Douglass) and 'The Badger Bride' are superb. And I've also a number of Slatter's collections on the shelves awaiting to be read (a couple by the lethal Lisa L Hannett & Angela Slatter combo).

I feel of late that Angela Slatter has had influence on everything I've been in: we shared a story home in the anthology The Year's Best Australian Fantasy & Horror, 2011 Ed. Liz Grzyb & Talie Helene. One of my stories 'Reading Coffee' was mentioned alongside her story 'Brisneyland by Night' (which I'll have to read) as two  recommended Australian stories recently at Fossick Book Reviews, and Angela Slatter has played a role in the last two anthologies I've had works in: she wrote the back cover blurb for Bloodlines Ed. Amanda Pillar, and then moved to the inside pages with a beautiful foreword for the anthology At the Edge Ed. Dan Rabarts & Lee Murray. 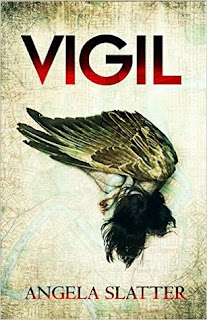 And there's a little more irony, I just attended an honorary dinner for Angela at the KSP centre here in Perth, where she read aloud her exquisite tale 'The Badger Bride'.

Angela Slatter has been conducting individual interviews with all the writers in At the Edge, which makes fascinating reading for anyone interested in reading or writing or for those simply intrigued by the genesis of stories.

My interview with Angela Slatter on my latest story 'Crossing' can be found here: (interview link)

And for all the other interviews so far:(link)

I'm yet to read Angela Slatter's recently released novel Vigil. It's available in all good bookstores and online too. If it's anything like her short work, I think it would be more than worth the read.

More on At the Edge

I was fortunate to have 'Crossing' mentioned alongside a few other great stories as a standout in a couple of reviews, and an editors' interview. Naturally all reading is subjective and so far I'm finding something to appreciate and admire in each individual story:

Angela Oliver's celebratory review at the I Love Books: NZ Booksellers blog includes a mention of 'Crossing' as one of Oliver's standout tales, along with 'Narco' by Michelle Child, 'Street Furniture' by Joanne Anderton, 'Hood of Bone' by Debbie Cowens,  'Call of the Sea' by Eileen Mueller and 'Responsibility' by Octavia Cade.

Here are a few of the stand-out tales in my opinion...

We also have ‘Crossing,’ by Anthony Panegyres, a ghost story with a difference. Poignant, bittersweet and something of a lesson in letting go of the past, it tells of Jane Self, separated by a cruel twist of fate from her husband and desperately seeking closure.
And I've been informed by the editor Lee Murray, along with book afficianado and friend, Jasmine Yee, and the lovely Juliet Marrillier that The Listener is a respected publication and a long standing household name in the Land of the Long White Cloud. I've pasted the review by Alisha Tyson below (congrats to other writers mentioned: Carlington Black, Phillip Mann, David Stevens): 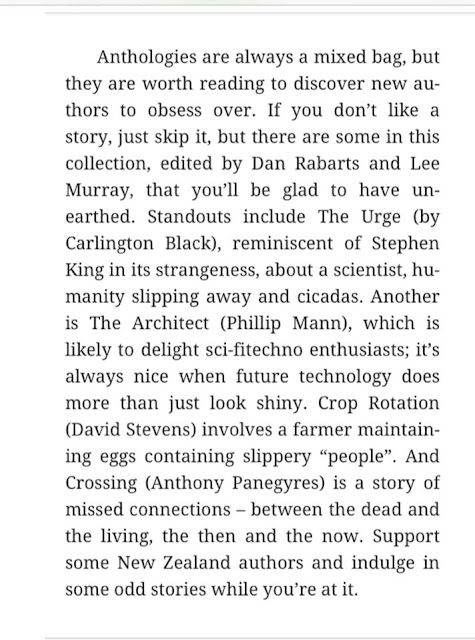 And an interview where the editors of At the Edge (Dan Rabarts & Lee Murray) comment on their personal favourites here (briefer mention here) at Ragnarok Publications.

I'd like to thank my writing group: Daniel Simpson, Annette Ong, Jolleh Ashbar and Laurie Steed for their feedback on the story along with Stephanie Gunn, who I traded stories with. And I'd also like to thank two of my former very talented creative writing students last year: Kate Enright and Paige Spence, for their love of the story, which led to me sending it out.  Whether or not the gifted duo pursue writing, I believe they'll both have bright futures. Kate and Paige's passion for the craft made them a pleasure to teach.

Currently Reading: The Maze by Panos Karnezis (shades of Grahame Greene and Gabriel Garcia Marquez); and also the collection All the Time in the World by the wonderful E.L Dottorow; and naturally, the anthology At the Edge.

Posted by Anthony Panegyres at 1:05 AM No comments: