Must a novel have a theme? If so, who is in charge of it?

Diane Johnson, Pesky Themes Will Emerge When You're Not Looking
Posted by Anthony Panegyres at 7:39 PM No comments:

Isobelle Carmody on Dreaming of Djinn, and Current Reads

The renown Isobelle Carmody was the guest on Monday's Meanjin blog post and she waxed lyrical about Dreaming of Djinn ed. Liz Gryzb, the latest anthology that I have a story in:

I have just this second finished a short story collection called Dreaming of Djinn edited by Liz Gryzb. It is the most mouthwatering collection of stories merging speculative fiction with the Arabian Nights. Right up my alley subject wise, and I mean it quite literally when I said it was mouthwatering. The food descriptions are just so sensuous and evocative that they pleased me aesthetically and made me salivate with longing. And there is belly dancing that ranges from dangerously potent to hilarious.

For the entire post and what Carmody is reading (including a few juicy bits on works that she's not entirely sold on) see the following link:
http://meanjin.com.au/blog/post/what-i-m-readingisobelle-carmody/

Carmody's words on the Meanjin website come at an appropriate time to announce that I'll have a story nestled within the treasure trove that is Meanjin later this year.

Dreaming of Djinn ed. by Liz Gryzb: nine stories in and wow!  But I'll let Carmody's afore mentioned words speak for the anthology rather than my own.

Philip Mansel's Levant: Splendour and Catastrophe in the Mediterranean examines three once cosmopolitan Levantine cities: Smyrna (Izmir), Alexandria and Beirut. Is there a better historian? 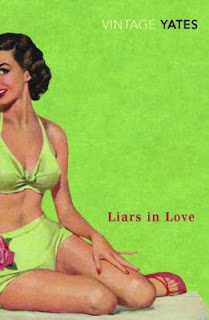 Liars in Love by Richard Yates: not quite the same as his sublime Eleven Kinds of Loneliness (some stories are certainly on par though) but still an exquisite collection by a writer whose portrayal of the period he lived in is arguably unrivalled.

And a steampunk anthology which, only two stories in, has so far disappointed - they're too pulpy for my own personal liking. I'll read a few more tales before I decide whether or not to surrender it to the shelves.


Posted by Anthony Panegyres at 9:21 PM No comments: