Book Review: How the Dead Live by Will Self

Review: How the Dead Live by Will Self

Will Self is one of the super intellects of modern literature. The question is whether or not his ostentatious narrative style works. The answer is a difficult one but denying his genius or importance to the world of writing would be a flippant disregard to say the least. In How the Dead Live, Self at times scintillates and at other times batters you about with his famed wit.
Lily Bloom, a wonderfully satirical Londoner, passes away from cancer and is met in the hospital by her guide to the dead, an Aborigine named Pharlap Jones. Kostas, the taxi driver and modern day Charon, drives her to a dead neighbourhood situated in Northern London where she meets her long deceased boy, who has transformed into Rudeboy; and a carooning and likeable lithopedion, a foetus she lost unknowingly.
How the Dead Live is a story about dying, life and the afterlife that examines addiction, family and contemporary culture; always in a dark, sharp and typically Self-like comedic fashion. Lily, for instance, is encouraged to attend Personally Dead Meetings with a twelve-step programme. As a Mother, she constantly observes her living daughters’ progress. The tragic lifestyle of her beautiful but heroine-addicted daughter, Natasha is conveyed in a beautifully sympathetic manner; which contrasts Lily’s cynical narration of her well-meaning and more conventional Jewish daughter, Charlotte.
Lily’s past is unravelled before us, and her daughters’ present keeps the reader engaged, combine all that with Self’s ascerbic observations and you have a compelling read.
At times though, Self meanders, and parts seem to virge on overkill. Especially Lily’s comments on recent world events, which sound more like a showy historical timetable rather than being more thoughtfully spaced out and interwoven through the text.
Overall, How the Dead Live is a worthwhile read. A little less clobbering in parts, such as the historical info-drops, and Self would have created a masterpiece. As it stands, however, it is still an impressive work that ambitiously deals with family in the modern era, along with its many catastrophes. 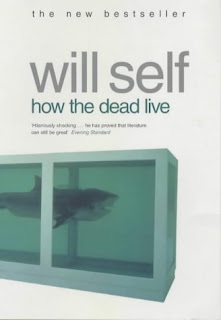 Anyway, I've placed these reads in order of my own personal preference, which does not mean that they don't all have merit. Most on the list are a real treat.

How the Dead Live Will Self

161 and The Quiet American were both fantastic reads.

I was a little disappointed by The Third Man (although it may be a better movie) and The Left Hand of Darkness (there were plenty of interesting ideas but the plot seemed too forced for my liking).

Observations outside of concentrating on the short story genre:

Posted by Anthony Panegyres at 12:19 AM No comments:

With my second publication I was told by the editor that they'd like some sort of digital face.  So I've created a quick-fire blog. As a luddite, maintaining this will be a challenge. I'll be posting sporadically at best.

Last year I finally got the courage to send stories off - and the first two that I'd actually written found homes. 'Coffee' in Dot Dot Dash 5 (Dec 2010) and 'The Wine Endures' in Andromeda's Special 50th edition (ASIM April 2011).


Having the first two stories that I'd written published allows me a little more confidence as a writer. And I think the couple of stories I've written since these are more developed but I guess time will be the judge of that.
Posted by Anthony Panegyres at 4:00 AM No comments: