"Dreaming of Djinn" Pre-Launch: "Oleander: an Ottoman Tale" and news. 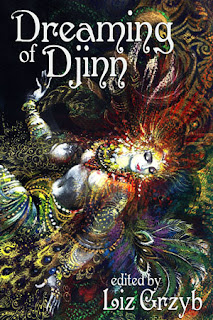 I neglect this blog. I'm not a blogger by nature and shedding my skin for the vast social media world isn't something that I'm overly comfortable with but I thought I'd touch base regarding the pre-launch of the anthology Dreaming of Djinn ed. Liz Grzyb

As I'm an isolated Perthite and most publications are launched in the bustling Eastern States, it happened to be only my second reading at a launch (well, this time at a jam-packed 'pre-launch'). I would have loved to have attended the Overland 204 launch at the Melbourne Writers' Festival a couple of years ago but couldn't due to work commitments, so it was a thrill to be a part of this. The Mystique Belly Dancing Troupe dazzled us all with opening act, which included especially well-chosen tunes, even opening with the Greek song Misirlou, which was either an ironic or clever selection. Then I had a bit of a chat with the audience before I read a section from my story 'Oleander: An Ottoman Tale', which, from all accounts, went well.

The audience, dancers and the Ticonderoga team created both a light and warm atmosphere. Every person I met seemed enthusiastic and engaged. I signed around thirty books along with artist/writer, Pia Ravenari and editor, Liz Gryzb, including ones for Lucy Sussex, Guy Salvidge and Juliet Marrilier, before time was up and we were all happily evicted. 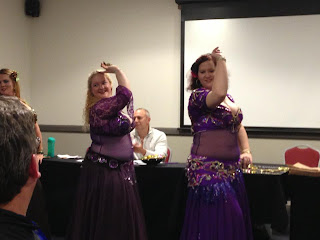 One novelist (a Norma K Hemming Finalist), read the story that very same night and messaged me:

Just finished reading "Oleander". It's very well written...You are a realist or literary writer masquerading as a fantasist, I think! Not that there needs to be hard and fast boundaries between these things. But your whole approach belongs, I feel, to literary fiction and not genre fiction, or not genre fiction as I know it anyway. That's not a criticism!

Which, I'll take as a compliment. After all, I'm more from the realist mould; my fantastic elements are usually slight; and the genre fiction that I revere tends to often be of the 'literary' bend.


Ultimately, I enjoy both realist and genre fiction - as long as I know that the story will encourage me to think/or reflect upon it at some point and that there are enough subtleties in a piece to unearth more layers with a second reading (be it through prose and syntax, issues and ideas, or plot and structure).

For me personally, it's been a humbling pleasure to have had works published in both literary journals and genre collections.

Currently Reading: All That I Am by Anna Funder

Next Publication: Another story of mine will be published in a literary journal that I really admire later this year. I'll reveal the journal closer to the publication date. It's my first published story without any hint of magical realism and also the first devoid of any Hellenic cultural references.  It does, however, have a few cultural references relating to both Dr Who and Cat Stevens. 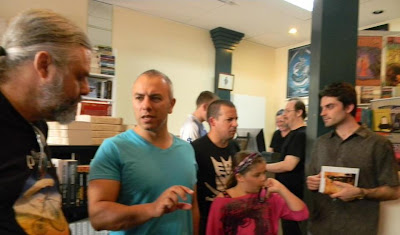 Some of Perth's Writers at Lee Battersby's book launch: Stephen Dedman, Anthony Panegyres (think that it's my first blog pic), Daniel Simpson and Guy Salvidge at Stefen's Books
Posted by Anthony Panegyres at 12:35 AM 3 comments: