My brother, Matthew Nicholas Phillips, is a physiotherapist by trade, but acts in plays, music-videos and short films.

He decided to adapt the first story that I'd written ('Coffee' published in Dotdotdash Magazine5 - I think in early 2011) in to a short independent film, with the aid of videographer and co-director, Alex Lorian. Their product, the short film 'Coffee', is premiering on the 20th this month at the University of WA (UWA) Social Sciences Lecture Theatre.

It was a pleasant surprise when Matthew told me he'd like to make a film of the story. My involvement was limited to meeting the exuberant, talented local cast and film-making team; and briefly explaining that 'Coffee' was my first story and a bit of a twisty, Dahl-esque one. I also mentioned that the dialogue was a little artificial, so that when they had the script (not adapted by me) to be wary of that element in the story and make the adequate changes. 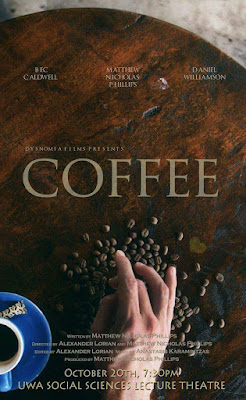 I feel as though I've evolved as a writer since my first couple of stories, but for my parents, my uncle Terry Pitsikas, and my brother, Matthew, 'Coffee' has always been their personal favourite. So much for the evolution of a writer...

I know I'm digressing here, but there are a couple of stories from the magazine 'Coffee' was published in that I really admire. One is 'R & L' is by Ryan O'Neill, a writer who always brings some originality to the short story form. 'R & L' cleverly explores lingering colonial values and attitudes, when an Australian volunteers to teach English in Rwanda. And 'Lollies' by David McLaren is an insightful Australian story about separation, family connections and disconnections.

As for  the film, 'Coffee', I haven't seen it yet, so it'll be completely new to me on the night too. I felt it important that the filming team and actors had free artistic license. Film is a different genre, and I'm eager to see what creative arcs they have taken with the short work.

The film will premiere before a longer independent film, Subject 36 by Alex Lorian.

A bouzouki player has provided the playing for the soundtrack. Although in his teens, Anastasis Karamintzas is an incredible talent. Everything he does is crisp and sharp, he's up there with the best I've heard. I've been playing plenty of rembetika and laika in the car since I was sent a snippet of the soundtrack.

Tickets are $15 for the Premiere on
Friday 20th October, 7:30 at the UWA Social Sciences Lecture Theatre. There is an intermission after 'Coffee' before the film Subject 36. Click on  Booking for the link and details.

Love to see you there!
Posted by Anthony Panegyres at 4:10 AM