A former lecturer in romance languages, D is now a middle-aged confidential agent of the Left, who is in attempting to secure coal for his side in his unnamed wore-torn home country (which contextually corresponds with . An enemy agent, L, is already in to perform the same task for what is depicted as the morally bankrupt Right.

The moment the widowed D steps off at the station he chances to meet the daughter of the coal magnate he is required to see. Despite their age gap, she begins to fall for the much older D. She even refers quite comically to her oedipal complex.

The story explores class differences, the grey issues of government and business, xenophobia and mistrust. D’s heroism stems from his valuing of humanity and he evolves over the text’s duration into a determined agent rather than the nervous, passive man that the reader is initially introduced to.

The Confidential Agent is a thriller, which concentrates on character and alludes to ethical dilemmas and larger ideologies rather than simply the ‘over-the-top’ action moments that often pollute many of today’s thrillers.

While not as enlightening as the Power and the Glory or The Heart of the Matter, The Confidential Agent is a highly entertaining and rewarding read. 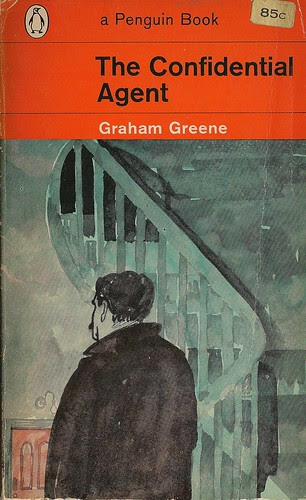 Posted by Anthony Panegyres at 12:55 AM